Last month, someone I follow on Twitter said that narcissists will lie to you about things that happened to you; they’ll lie about things you saw with your own eyes. “Narcissists,” this person tweeted, “will lie to YOU about YOU.”

My eyes stung with tears immediately. I’d never heard it said that way, and it was so much truth – even all these years after leaving Jerkface – that it took my breath away.

Narcissists will lie to YOU about YOU. 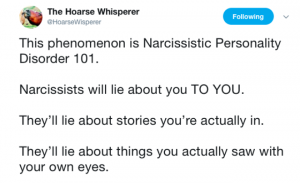 My Jerkface ex-husband relied on gaslighting to infect the foundation of my very reality so that for years I was paralyzed by self-doubt. Early in our relationship, my desire to see a friend for dinner without him launched a 3-day emotional torture fest. He insisted that when people really love each other, they do everything together. So because I wanted to do something without him, I didn’t love him and now had to prove my love to him.

I never did go to that dinner, and in fact with very few exceptions where HE needed to do something without ME,  I don’t think I had a moment to myself in years. We worked together, so he basically stalked me, and accounted for my every move, 24/7.

But that part isn’t the gaslighting. The gaslighting is when, about 3 years into our relationship,  he was suddenly interested in having some time alone (maybe to cheat on me, maybe because he was simply bored) and insisted this whole time he had in fact WANTED me to see friends but I was just never that outgoing.

Me?? I had been a very gregarious sort before getting involved with Jerkface, and HE was the one who was painfully, awkwardly shy, but by this time in our relationship,  I barely remembered my true self. Even so, I still had enough fight in me to question his suddenly relaxed and encouraging attitude toward time apart.

The more logical and specific I was, the more he countered and dismantled. The more I protested and objected, the more calm and dismissive he became. Finally, after he shook his head at me in a masterful display of feigned pity for my feeble grasp on reality, I gave up the fight.

Deep inside, I knew he was wrong, but the part of me that knew the truth was like a shadow version of myself that I had learned to suppress, silence, and ignore.

I had never felt so alone. It’s not simply I because didn’t have a true partner, but I didn’t even have myself. He had crushed me into submission so successfully that I Iet him not just define my reality, my thoughts, my perception, but to define ME.

In the world Jerkface fabricated, he was a generous, outgoing husband who just wanted his sad little homebody wife to try to meet some people and get out of the house once in a while.

And though I didn’t exactly believe it, at some level, I accepted it.

Why didn’t I just say to hell with him and walk right out? Well, with a narcissist, there are beginner moves and advanced moves. Challenging your reality is an advanced move, so by the time a narcissist is using it on you, you’re a different person than you used to be.

Early in the relationship, a narcissist will love bomb you. Next, they’ll isolate you. Then, they’ll control what you eat, wear, or say. Later, after they’ve eroded who you are, gaslighting is the narcissist’s coup de grace.

The first half of our marriage was no picnic, but I wasn’t yet an utter shell of myself. I had certainly begun to tailor my likes, my clothing, and even my choice of words to things that were less likely to set  Jerkface off.

The blatant dismantling of reality didn’t happen until we’d been together for a while and I’d learned all the basic dance moves.

The horror is that there were other advanced moves once gaslighting was in the picture:

While those abuses were horrifying, the gaslighting was the most insidious. I started keeping (and hiding) a journal so that I could refer back to it for a record of the truth, and I started telling friends and some family members what was going on, and of course asking them if this was just two people fighting or if this was something more.

It was definitely something more. It was verbal and emotional abuse, veering steadily into the physical realm. The physical nature of the abuse did make it somehow easier to consider leaving for good, but the gaslighting (although I didn’t know what it was called back then) made it imperative.

By lying to me about me, my experience, my truth, Jerkface was killing me. Not taking my breath away. Not making my heart stop beating. But killing who I was, taking away my experience, denying my very reality.

To find my way back to myself, I needed to leave. And leave I did. Finally. And this time I never went back.