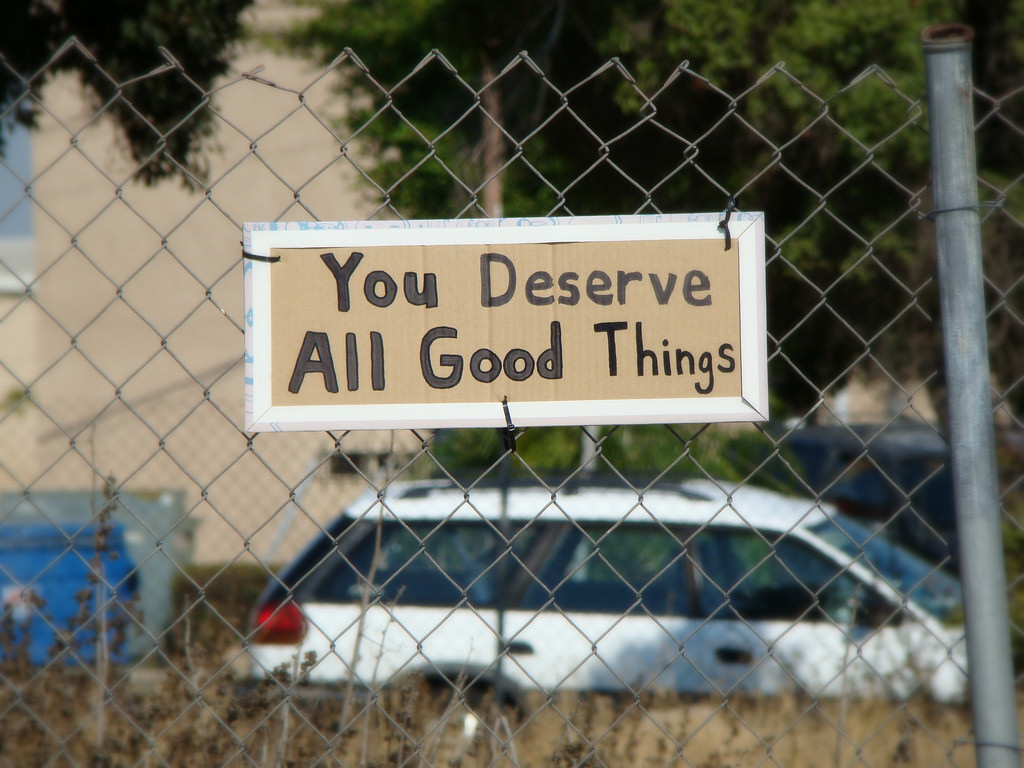 When I was with Jerkface, people would often say to me, “Oh, honey, you just don’t deserve to be treated that way.” On the surface, that made sense, but for some reason, I stayed with Jerkface and let him abuse me for years. It took me many more years to realize that in order to stay with someone like that, somewhere inside I believed that being treated that way was exactly what I deserved.

Now that it’s been almost 10 years since I’ve been married to a normal, non-abusive man, I think I may be able to clear this up for those of you who hear those words, understand them, but still have no idea how — or if it’s even possible–to escape the abuse.

When people say you don’t deserve to be treated that way what they really mean is that most people do not treat other people the way that a Jerkface treats you.

It is hard to believe, especially if you grew up where you were abused by siblings, or parents, or teachers. Or all of the above. But it really is true.

There are those of us who grew up with abuse at home (or church, or school, or all of the above) but still want to be in loving relationships. And there are others who grew up with abuse who went to the dark side and are looking for people like us to treat badly. These people literally test us out to see what we will put up with. But when they try these tricks on people who know they don’t deserve it, they don’t get very far.

For those of us who don’t understand there’s an alternative to abusive behavior, it can be hard to believe there are people out there who simply will not stand for it.

After a bad first date, they’ll never see that person again. If someone insults them, they won’t try to understand why. Instead of deciding this damaged person needs their love and assistance, they decide it’s just not worth their time.

These behaviors that serve us well as children, that help us cope and get through a bad situation, do not help us when we’re older. They hurt us.

Abusers give off signals. If you are not used to being treated badly or have learned that you don’t deserve to be treated badly, you’ll say, “I’ve seen this before, and I’m just not interested.” But if you haven’t worked through your past, this behavior will seem normal to you. You think, “Oh, I’ve done this before. I know how to work with this. I may even be able to help this person.”

We actually believe that it is our job in life to contend with people like this, to try to make things better for them, maybe even to fix them.

Believe it or not, most people do not put up with this crap. Healthy people see that behavior, and they just aren’t interested. Their first thought is that the problem lies with the abuser, not that the abuser is their problem to fix.

A healthy relationship is not a project. A relationship is something that gives you good things. A relationship adds to your life, instead of bringing you heartache or a lifetime of trying to change who you are, how you talk, or how you dress in the hopes that Jerkface will stop treating you badly.

So when people say, “You don’t deserve to be treated that way,” it’s a very simplistic / glib way to say, “This is not what a relationship is about.” And as someone who used to dismiss that because it just didn’t make sense to me, let me say that it really is true.

There really are people who want a relationship that doesn’t revolve around hurting you.

But please do believe me. It doesn’t have to be like this, and for so many people (even people who have been abused for years) it isn’t like this anymore. Join us on the other side. It’s much better here!